The Bible was written by about thirty-nine persons over a period dating from about 1700 B.C. to about 100 A.D.We are told it is the Word of God approximately 2,500 times. 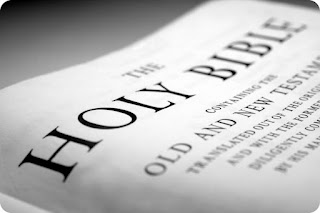 The Wycliffe Bible was the first translation of the English Bible. John Wycliffe was responsible for initiating the translation, which was finished by John Purvey in approximately 1388 A.D.


Regarding the King James Bible, a conference was held on January 14-16, 1604. The king decided to have the Bible translated into English. Fifty-four of the greatest biblical scholars were involved. They were divided into 6 groups—3 for the Old Testament and 3 for the New Testament. One group for the Old Testament and one for the New Testament met at Oxford, two others at Cambridge, and two again at Westminster. The work began in 1607 and was completed in 1610. The first King James Bible appeared in 1611.


The Bible as we know it today is actually a collection of books, now treated as a single volume, the Holy Bible, and considered by many to be divinely inspired. The name 'Bible' is derived from Latin 'biblia' ('books'), itself from 'Byblos', a city of ancient Phoenicia, which exported papyrus on which text was written by scribes.

The so-called Old Testament is a large compilation of the sacred Jewish texts, including the five books traditionally attributed to Moses, as well as many other books of histories, prophecies, psalms and proverbs.
Originally, these were written in Hebrew, with a few passages in Aramaic.

Below are brief summaries of a few of these:

Genesis - This is appropriately an account of the beginnings of the universe, of life, of humankind, of the Jewish peoples, of sin, etc. It describes the foundation of the Twelve Tribes of Israel.

Exodus - 'Exodus' relates the story of God's miraculous deliverance of his people Israel from bondage in Egypt, and the presentation of the Ten Commandments to Moses on Mount Sinai. Moses then led the Israelites across the desert for forty years. He pointed the way towards the Promised Land of Canaan, though poignantly never reached it himself.

Judges - Having recently settled in the Promised Land, the Israelites still encountered much hostility from neighbouring tribes, such as the Philistines, who would sometimes also lead God's chosen people astray. God sent leaders or 'judges' to help them.

Books of Kings and Chronicles - These volumes continue the account of Israel's history from the foundation of its monarchy, describing the reigns of numerous rulers, the building of the Temple by Solomon, the emergence of important prophets such as Elijah, and finally also the fall of Jerusalem to the Babylonian empire.

Psalms - The Psalms were written in the form of Hebrew poetry, and include many well-known sacred songs and prayers.

Proverbs - These are wise sayings, in concise format - the original Words of Wisdom.

Song of Songs - This is a song or poem about the joy of love and youth.

Isaiah - The book of Isaiah contains numerous well-known prophecies. Isaiah warns the people of God's impending judgement, but after the fall of Jerusalem, the message is also one of comfort and hope of deliverance from Babylon.

Daniel - Daniel and three of his friends were exiles in Babylon, but refused to give up their Jewish faith. This book contains many well-known stories, including those of Daniel in the lions' den, Shadrach, Meshach and Abednego, Belshazzar's Feast, and the ominous writing on the wall.

Jonah - Everyone knows the story of Jonah and the whale. Jonah was a reluctant prophet chosen to warn the people of Nineveh of God's intentions to punish the city.


The so-called New Testament consists of narratives and letters written since the time of Jesus Christ here on the earth. These scriptures were originally written in Greek.

The Gospels - The first four books of the New Testament are the Gospels of Matthew, Mark, Luke and John, apostles of Christ. These describe the birth, upbringing and ministry of Jesus, including many accounts of miracles he performed, and many sayings and words attributed to him. Finally, they also detail the events leading up to his crucifixion, death, and resurrection.

Acts - This book is a sequel to Luke's Gospel, and describes the struggles and achievements of the early Christian church. It includes many famous stories, such as the coming of the Holy Spirit at Pentecost, the stoning of Stephen, and the miraculous conversion of Saul (later known as Paul) on the road to Damascus.

The letters of St Paul - Paul wrote many letters or epistles to the early Christians and churches, encouraging and instructing them in the faith. The following letters are attributed to Paul: Romans, 1 Corinthians, 2 Corinthians, Galatians, Ephesians, Philippians, Colossians, 1 Thessalonians, 2 Thessalonians, 1 Timothy, 2 Timothy, Titus, and Philemon.

The three letters of John - The main emphasis in John's letters is on true Christian love.

Revelation - This is another letter written by John (who may be the same John as the author of John's Gospel and of 1, 2 and 3 John), to seven churches. The book is full of descriptions of visions of Jesus in his glory, of angels, of the heavenly Jerusalem, of the infamous Beast, and of the whore Babylon. The overall message is that evil will ultimately be destroyed.

Besides the Old and New Testaments, there are numerous other scriptures, which are recognised by some churches and not by others. These are generally grouped together as the so-called Apocrypha (from the Greek, meaning 'secret'), including the following fifteen books (which are sometimes inserted among the books of the Old Testament): 1 Esdras, 2 Esdras, Tobit, Judith, Additions to Esther, Wisdom of Solomon, Ecclesiasticus, Baruch, Letter of Jeremiah, Prayer of Azariah and the Song of the Three Young Men, Susanna, Bel and the Dragon, Prayer of Manasseh, 1 Maccabees, and 2 Maccabees.