Every Christmas season our thoughts turn to the birth of Christ and to his mother, Mary. To some extent, we all take the nativity for granted. But why  was   Jesus born of a virgin? One answer, of course, is to fulfill the prophecy of Isaiah 7:14: "Behold the virgin shall conceive, and bear a son, and shall call his name Immanuel."

But that's more descriptive than causal: why was it necessary in the first place? There are, of course, many profound theological issues inherent in the virgin birth. One way to view this issue is to address one of the problems it solves. 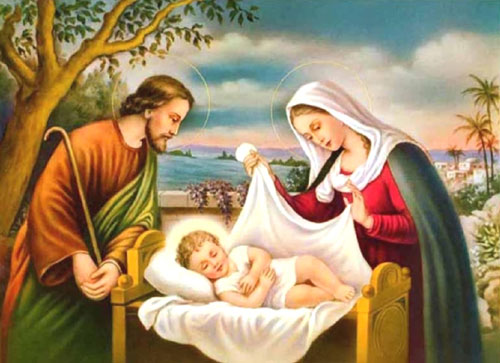 God announced very early that His plan for redemption involved the Messiah being brought forth from the tribe of Judah (1),  and specifically from the line of David 2.  The succession of subsequent kings proved to be, with only a few exceptions, a dismal chain. As the succeeding kings of Judah went from bad to worse, we eventually encounter Jeconiah (also known as Jehoiachin), upon whom God pronounces a " blood curse" : "Thus saith the Lord, Write ye this man childless, a man that shall not prosper in his days: for no man of his seed shall prosper, sitting upon the throne of David, and ruling any more in Judah."(Jeremiah 22:30)

This curse created a rather grim and perplexing paradox: the Messiah had to come from the royal line, yet now there was a "blood curse" on that very line of descent! (I always visualize a celebration in the councils of Satan on that day. But then I imagine God turning to His angels, saying, "Watch this one!")


The answer emerges in the differing genealogies of Jesus Christ recorded in the gospels. Matthew, as a Levi, focuses his gospel on the Messiahship of Jesus and presents Him as the Lion of the Tribe of Judah. Thus, Matthew traces the  legal line from Abraham (as any Jew would) through David, then through Solomon (the . royal. line) to Joseph, the  legal  father of Jesus (3).

On the other hand, Luke, as a physician, focuses on the humanity of Jesus and presents Him as the Son of Man. Luke traces the blood line from Adam (the first Man) through to David -- and his genealogy from Abraham through David is identical to Matthew's.  But then after David, Luke departs from the path taken by Matthew and traces the family tree through  another son of David (the second surviving son of Bathsheba), Nathan, down through Heli, the father of Mary, the mother of Jesus (4).

One should also note the exception to the law which permitted inheritance through the daughter if no sons were available and she married within her tribe (5).

The daughters of Zelophehad had petitioned Moses for a special exception, which was granted when they entered the land under Joshua. I believe it was C.I. Scofield who first noted that the claims of Christ rely upon this peculiar exception granted to the family of Zelophehad in the Torah. Heli, Mary's father, apparently had no sons, and Mary married within the tribe of Judah. Jesus was born of the virgin Mary, of the house and lineage of David and carrying legal title to the line, but without the blood curse of Jeconiah. [I believe that every detail in the Torah -- and the entire Bible -- has a direct link to Jesus Christ.  "The volume of the book is written of me." (Psalm 40:7)  [For a more detailed discussion, see the book, Cosmic Codes -- Hidden Messages from the Edge of Eternity.]

This was no afterthought or post facto remedy, of course. It was first announced in the Garden of Eden when God declared war on Satan:  " I will put enmity between thee and the woman, and between thy seed and her seed; it shall bruise thy head, and thou shalt bruise his heel."(Genesis 3:15)

The "Seed of the Woman" thus becomes one of the prophetic titles of the Messiah. This biological contradiction is the first hint -- in the early chapters of Genesis -- of the virgin birth.


John also presents a genealogy, of sorts, of the Pre-Existent One in the first three verses of his gospel (6). The Prophet Micah also highlights this: " But thou, Bethlehem Ephratah, though thou be little among the thousands of Judah, yet out of thee shall he come forth unto me that is to be ruler in Israel; whose goings forth have been from of old, from everlasting."(Micah 5:2)